This build can work without any constellations, but really shines when you have all 6. At constellation level 6, Diluc becomes an unstoppable Pyro DMG dealing machine, weaving 2 normal attacks in between every Searing Onslaught hit. 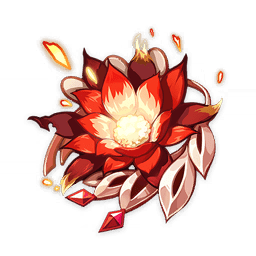 Performs up to 4 consecutive strikes.

Drains Stamina over time to perform continuous slashes.
At the end of the sequence, perform a more powerful slash.

Plunges from mid-air to strike the ground, damaging enemies along the path and dealing AoE DMG upon impact.

This skill can be used 3 times consecutively. Enters CD if not cast again within a short period.

Releases intense flames to knock nearby enemies back, dealing Pyro DMG. The flames then converge into the weapon, summoning a Phoenix that flies forward and deals massive Pyro DMG to all enemies in its path. The Phoenix explodes upon reaching its destination, causing a large amount of AoE Pyro DMG.
The searing flames that run down his blade cause Diluc's Normal and Charged Attacks to deal Pyro DMG for a time.

Diluc's Charged Attack Stamina Cost is decreased by 50%, and its duration is increased by 3s.

The Pyro Enchantment provided by Dawn lasts for 4s longer. Additionally, Diluc gains 20% Pyro DMG Bonus during the duration of this effect.

Tradition of the Dawn Knight

Refunds 15% of the ores used when crafting Claymore-type weapons.

When Diluc takes DMG, his Base ATK increases by 10% and his ATK SPD increases by 5%. Lasts for 10s.
This effect can stack up to 3 times and can only occur once every 1.5s.

Increases the Level of Searing Onslaught by 3.
Maximum upgrade level is 15.

Increases the level of Dawn by 3.
Maximum upgrade level is 15.

Diluc gets a boost to CRIT Rate as they ascend.

This showcase features Zy0x with a complete guide for Diluc, including artifacts, team comps, and playstyle.