With the addition of Tenacity of the Millelith, Zhongli's utility power has increased tremendously. By stacking HP, his shields will keep your team healthy throughout the hardest fights. 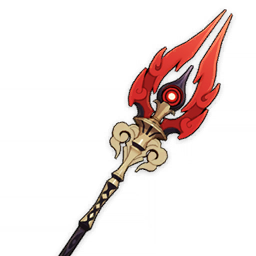 Performs up to 6 consecutive spear strikes.

Consumes a certain amount of Stamina to lunge forward, causing stone spears to fall along his path.

Commands the omnipresent power of the earth to solidify into a Stone Stele, standing 30 seconds, dealing AoE Geo DMG at the creation.

Causes nearby Geo energy to explode, causing the following effects:

When created, deals AoE Geo DMG. Additionally, every 2 seconds, it will resonate with other nearby Geo Constructs, dealing Geo DMG to surrounding opponents. Stele creation and Resonance generate 0.5 elemental particles.
The Stone Stele is considered a Geo Construct that can both be climbed and used to block attacks.
Only one Stele created by Zhongli himself may initially exist at any one time.

Possesses 150% DMG Absorption against all Elemental and Physical DMG.
Characters protected by the Jade Shield will decrease the Elemental RES and Physical RES of opponents in a small AoE by 20%. This effect cannot be stacked.

Brings a falling meteor down to earth, dealing massive Geo DMG to opponents caught in its AoE and applying the Petrification status to them.

When the Jade Shield takes DMG, it will Fortify:

Can stack up to 5 times, and lasts until the Jade Shield dissapears.

Zhongli deals bonus DMG based on his Max HP:

Refunds 15% of the ores used when crafting Polearm-type weapons.

Rock, the Backbone of Earth

Increases the maximum number of Stone Steles created by Dominus Lapidis that may exist simultaneously to 2.

Stone, the Cradle of Jade

Planet Befall grants nearby characters on the field a Jade Shield when it descends.

Increases the Level of Dominus Lapidis by 3.
Maximum upgrade level is 15.

Lazuli, Herald of the Order

Increase the Level of Planet Befall by 3.
Maximum upgrade level is 15.

When the Jade Shield takes DMG, 40% of that incoming DMG is converted to HP for the current character. A single instance of regeneration cannot exceed 8% of that character's Max HP.

Zhongli gets a boost to Geo DMG as they ascend.

This showcase features Zy0x with a complete guide for Zhongli, including artifacts, team comps, and playstyle.