Layla is an HP-scaling support character that provides solid shields and energy. HP increased by 20%. When an Elemental Skill hits opponents, you gain the Grand Hymn effect for 20s. This effect increases the equipping character's Elemental Mastery by 0.12% of their Max HP. This effect can trigger once every 0.3s. Max 3 stacks. When this effect gains 3 stacks, or when the third stack's duration is refreshed, the Elemental Mastery of all nearby party members will be increased by 0.2% of the equipping character's max HP for 20s. 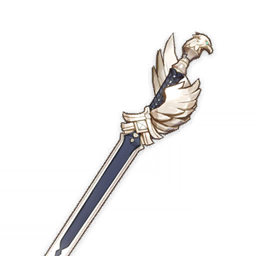 Sword of the Radiant Path

Performs up to 3 rapid strikes.

Puts forth a shield known as the Curtain of Slumber, dealing AoE Cryo DMG.
The Curtain of Slumber's DMG Absorption is based on Layla's Max HP and absorbs Cryo DMG with 250% effectiveness. When the shield is deployed, Layla will have Cryo applied to her briefly.

New Night Stars cannot be created until the previous wave of Shooting Stars has been fired completely.

Dream of the Star-Stream Shaker

Unleashes a Celestial Dreamsphere that constantly fires Starlight Slugs at opponents within its AoE, dealing Cryo DMG.
When a Starlight Slug hits, it will generate 1 Night Star for nearby Curtains of Slumber. Each Curtain of Slumber can gain 1 Night Star this way every 0.5s.

While the Curtain of Slumber is active, the Deep Sleep effect will activate each time the Curtain gains 1 Night Star:

The DMG dealt by the Shooting Stars fired by Nights of Formal Focus is increased by 1.5% of Layla's Max HP.

When Layla crafts Character Talent Materials, she has a 10% chance to receive double the product.

When Shooting Stars from Nights of Formal Focus strike opponents, they will each restore 1 Energy to Layla. Each Shooting Star can restore Energy to her in this manner once.

Secrets of the Night

Increases the Level of Nights of Formal Focus by 3.
Maximum upgrade level is 15.

When Nights of Formal Focus starts to fire off Shooting Stars, it will grant all nearby party members the Dawn Star effect, causing their Normal and Charged Attack DMG to increase based on 5% of Layla's Max HP.
Dawn Star can last up to 3s and will be removed 0.05s after dealing Normal or Charged Attack DMG.

Increase the Level of Dream of the Star-Stream Shaker by 3.
Maximum upgrade level is 15.

Layla gets a boost to HP% as they ascend. In this showcase, Braxophone breaks down all the intricacies of playing Layla and the optimizations you can do to get the most out of her kit.